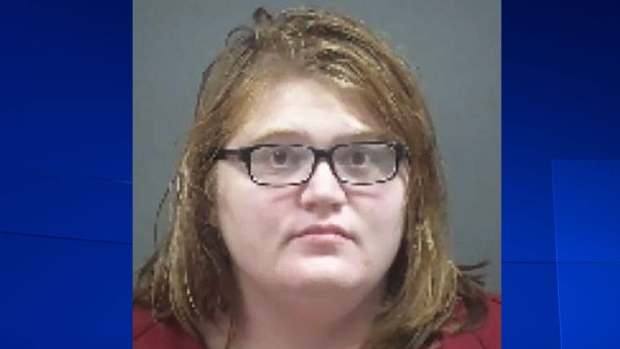 The boy's body was found at 10:23 p.m. in the bay after it was spotted near the Embarcadero Resort, police said.

PHOTOS Body found off Oregon bridge Police are investigating after a body, believed to be that of a 6-year-old boy, was found at the Yaquina Bay Bridge in Oregon.

Detectives found McCabe on the bridge and arrested her on suspicion of aggravated murder, murder and manslaughter, police said.

She was booked into the Lincoln County Jail, with bail set at $750,000. She has not yet had a court appearance or lawyer assigned for her defense.

Police are asking anyone who saw the woman and child on the bridge to call detectives.

The Yaquina Bay arched bridge, one of the most famous on the Oregon coast, opened in 1936. It's listed on the National Register of Historic Places.

In 2009, a woman tossed her two young children off a bridge in Portland, killing her 4-year-old son. A daughter, then 7 years old, survived. Amanda Stott-Smith was sentenced in 2010 to at least 35 years in prison.