"National Aboriginal Day is an opportunity for all Canadians to celebrate the contributions of First Nations, MÃ©tis and Inuit people to our country and our province. And even Read More ..portantly, it is a reminder to young aboriginal people that their heritage and culture are a proud and strong foundation on which to build their future."

June 21 was chosen because of the cultural significance of the summer solstice, the first day of summer and longest day of the year.

Ten years have passed since the federal government declared June 21 to be National Aboriginal Day in order to honour and celebrate Canada's Indians, Inuit and MÃ©tis.

When Gov. Gen. RomÃ©o LeBlanc signed the proclamation formally designating the day on June 13, 1996, he spoke about the important contributions that aboriginals have made in the country.

"Many cities in Canada are less than a hundred years old. But aboriginal people have lived in this land for more than a hundred centuries," said LeBlanc at Rideau Hall.

"From coast to coast and in the Arctic, they first explored our lakes and rivers, they first mastered our forests and prairies, and they helped those who came later to join them."

June 21 was chosen because of the cultural significance of the summer solstice, the first day of summer and longest day of the year. Many aboriginal groups mark the date as a time to celebrate their heritage.

"On June 21st, this year and every year, Canada will honour the native peoples who first brought humanity to this great land," said Leblanc. "And may the first peoples of our past always be full and proud partners in our future."

The day's proclamation was an event 14 years in the making.

1982: National Indian Brotherhood (now the Assembly of First Nations) calls for the creation of National Aboriginal Solidarity Day on June 21.

1995: The Royal Commission on Aboriginal Peoples recommends the designation of a National First Peoples Day. The Sacred Assembly, a national conference of aboriginal and non-aboriginal people chaired by Elijah Harper, calls for a national holiday to celebrate the contributions of Canada's Aboriginal Peoples.

1996: June 13: Gov. Gen. RomÃ©o LeBlanc declares June 21 as National Aboriginal Day after consultations with various aboriginal groups. The inaugural day is celebrated with events from coast to coast to coast.

Since then, the day has been celebrated in both small venues - such as elementary schools - and large venues alike.

In 2005, two of Canada's big banks hosted events at their downtown Toronto offices to mark the day. Also that year, in Iqaluit, the day was marked in a special way - 11 Inuit men and women made up the graduating class of the Akitsiraq law school, a one-time co-operative venture between the University of Victoria and Nunavut Arctic College meant to boost the number of lawyers in the North. Overnight, Nunavut's population of Inuit lawyers grew from one - Premier Paul Okalik - to 12.

To mark the 10th anniversary of National Aboriginal Day, dozens of formal and informal events were planned across the country  , ranging from sunrise ceremonies at Nathan Phillips Square in Toronto to aboriginal art workshops at the Canadian Museum of Civilization in Gatineau, Que. There's also a conference on Aboriginal contributions to the Canadian military experience  at Royal Military College in Kingston.

Here is a listing of National Aboriginal Day events across Canada for 2006:

We do not endorse and are not responsible for the content of external sites. Links will open in new window.

How many aboriginal Canadians are there in Canada?

How many live on and off reserves?

About seven out of 10 aboriginal people live off a reserve, according to the 2001 census, with almost a third of those living in large cities. Nearly 30 per cent live on reserves.

Where do aboriginal people live in Canada?

In 2001, the provinces with the largest aboriginal populations were Ontario, British Columbia, Alberta, Manitoba and Saskatchewan.

Winnipeg had the largest North American Indian population among census metropolitan areas, with 22,955. Alberta had the highest proportion of MÃ©tis, at 23 per cent. And half of Canada's Inuit population lives in Nunavut.

What are the projections for Canada's aboriginal population?

By 2017, there will be an estimated 1.39 million to 1.43 million aboriginal persons, according to Statistics Canada. Aboriginals would represent 4.1 per cent of the Canadian population, up from 3.4 per cent in 2001.

Canada's aboriginal population is expected to grow by 1.8 per cent annually, more than twice the rate of 0.7 per cent for the general population. The aboriginal birth rate is 1.5 times the Canadian birth rate.

A study in First Nations 101

With as many as 10,000 native kids in Toronto, the public board is boosting heritage awareness 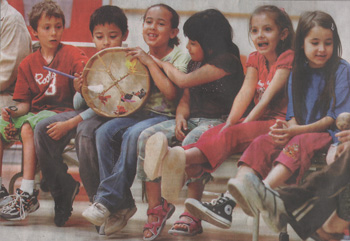 Natalie G****** and her Grade 2 classmates at Humewood Community School try out a drum, part of a series of activities at the school to mark National Aboriginal Day

The Grade 2 children at Humewood Community School are thrilled to be smoking in class.

Not puffing on cigarettes, but breathing wafts of burning sage in an aboriginal ceremony the school is holding to help students better understand their native classmates.

As Humewood mother Joanne Vautour, who is part Ojibwa and part French, circles the room with the small dish of sage for this traditional "smudge" ceremony designed to clear away negative thoughts, child after child reaches into the smoke and waves it over their face and body. Read More ..

TORONTO, June 21 /CNW/ - National Aboriginal Day is a time to celebrate the accomplishments of aboriginal communities in Ontario and across Canada. It is a time to treasure rich traditions and appreciate the contributions made by elders, leaders, artists and all individuals who value their aboriginal heritage. And it is a time to look forward to changes which will help these communities not only to survive, but to thrive.

I would like to take this opportunity to look at the current situation of Canada's aboriginal peoples. Read More ..

"Thank you for inviting me to join you today, for this special celebration in honour of National Aboriginal Day. I commend the BMO Nesbitt Burns Diversity Council for hosting this event.

I understand that, since the Council was created in 2002, BMO Nesbitt Burns has garnered much recognition as a leader in the development of a diverse and equitable workplace. These include a listing among Canada's Top 100 Employers and awards for the advancement of women, people with disabilities, visible minorities and aboriginal employees. "

"....few Canadians realize that there are more than 600 First Nations governments or bands in Canada, roughly half of them in Ontario and BC." Read More ..

Welfare Briefing to the UN committee on Economic, Social and Cultural Rights on the occasion of the review of Canada's fourth and fifth periodic reports

The purpose of the Caring Society is to promote the well being of all First Nations children, youth, families and communities with a particular focus on the prevention of, and response to, child maltreatment. Read More ..