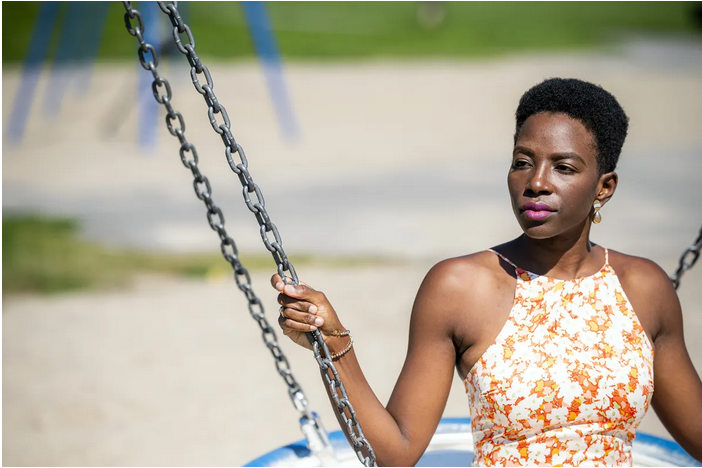 Olubukola Ajayi, a mother from Nigeria, in the east end of Ottawa, on Sept. 15, 2022
Ashley Fraser, The Globe and Mail

An Ontario appeal court has sent three children back to Nigeria and the custody of their father, rejecting their mother's arguments that she could not get a fair shake in that country because of patriarchal attitudes and anti-gay prejudice.

The case of Olubukola Ajayi and Eyitope Ajayi is one of a growing number of disputes in Canada that set concerns about international child abduction against arguments about unfairness and discrimination in foreign jurisdictions.

Ms. Ajayi argued in court that she was justified in bringing their three young children to Canada without the father's consent last November, because of discrimination, abuse (which Mr. Ajayi denies committing), patriarchal attitudes and the influence of her ex-husband's family in Nigeria.

She asked the Ontario Superior Court to assume jurisdiction for the couple's parenting issues and grant her sole decision-making authority over the children.

On the same day, Mr. Ajayi asked a Nigerian court to dissolve the marriage.

In Nigeria, homosexual acts may be punished with jail sentences. Mr. Ajayi made reference in a court document filed in Nigeria to Ms. Ajayi being linked to the LGBTQ community. That forced Ontario judges, in an initial ruling and an appeal, to grapple with how Nigeria's legal system operates, and determine whether its courts would put the children first.

“I ran here just for a fair shot at protecting my rights as their mom,” Ms. Ajayi, who trained as a lawyer in Nigeria, said in an interview. Both she and her ex-husband are dual citizens of Canada and Nigeria, as are the children; Ms. Ajayi travelled to Canada to give birth to the children here.

But the courts here, she said, “did not understand how being a man in Nigeria gives all this extra privilege and power. I had never planned to alienate my children from their father and his family. But I knew that that's what they wanted to do to me in Nigeria.”

Paul Riley, a lawyer for the father, said the decision showed that Ontario courts will stand up to child abduction.

“I think what the decision shows this week is that Canada is not going to embrace those who involve themselves in child abduction. You are not going to leave your country and then wrap yourselves in the warm embrace of the Ontario judicial system.”

Canada is a signatory to the Hague Convention on the Civil Aspects of International Child Abduction, which sets out the legal rules for returning children to their home jurisdiction. But Nigeria is not a member of the convention, and Ontario law provides that the province's courts may take jurisdiction in such a case where it is satisfied that the foreign country does not put children's best interests first.

A two-woman, one-male panel of Ontario's Divisional Court released a written ruling this week explaining why they had upheld Family Court Justice Tracy Engelking's decision to reject jurisdiction in the case. Having taken the children without consent, Ms. Ajayi needed to show they would suffer serious harm if returned to Nigeria, Justice Elizabeth Sheard, Justice Katherine Swinton and Justice David Aston said.

The judges said they accepted Justice Engelking's ruling from May that Ms. Ajayi had failed to do so. Justice Engelking found that Ms. Ajayi had only ever said she might be asexual, and that Mr. Ajayi himself had testified in Ontario that he supports gay rights. An expert in Nigerian law testified that none of this would be a factor in determining the children's best interests in a Nigerian court.

The children are now back in Nigeria. Ms. Ajayi said she will not return to Nigeria but her lawyers will fight in that country for primary custody for her, “and to have them returned back to me.” If they do not succeed, they will ask for video call access and holidays with Ms. Ajayi in Ottawa.

“In the absence of persuasive evidence of abuse or discrimination, it's appropriate to send these cases back to the country of origin - which also has the effect of telling people that Canada is not going to become a haven for child abduction,” he said.

He said it is also a “question of balance.” In some countries, politics may wrongly enter family-law disputes. “I think the court was satisfied that Nigeria in 2022 is not one of those countries.”

Ms. Ajayi's lawyer Valerie Akujobi said it's a challenge when Canadian courts have to make determinations based in part on attitudes and sentiments in a foreign jurisdiction.

“The court does try to strike the right balance; in this case, we just felt that certain aspects had been perhaps lost in translation.”

The President of the Canadian Children Rights Council says an Owen Sound judge made the right decision.

Grant Wilson is referring to the case of two year old Daine Fleguel-Cannock.

The Canadian-born boy is at the centre of a custody dispute between his Canadian mother and Australian father.

The mother, Jessica Fluguel (flu-gull) is appealing a decision made by Justice Robert Thompson to have her son's custody hearing in the Australian courts.

However, Wilson says the judge did everything he was supposed to and is totally in line with the Hague Convention.

Bacolod Regional Trial Court Judge Ray Alan Drilon has annulled the marriage of a Negrense couple after a DNA test showed that the child borne by the wife was not the biological offspring of the husband who works abroad.

The family court judge ruled that the marriage of the couple, whose names are being withheld by the DAILY STAR on the request of the court, was null and void.

Due to fraud committed by the wife in getting her overseas worker husband to marry her, properties acquired during their marriage are awarded in favor of the husband, the judge said in his decision, a copy of which was furnished the DAILY STAR yesterday.

The complainant said he was working as an electronics engineer in the United Arab Emirates and on his return to the Philippines in 2001, his girlfriend of 10 years with whom he had sex, showed him a pregnancy test result showing that she was pregnant.

On receiving the news he was overjoyed and offered to marry her. Shortly after he went to Saudi Arabia to work, and his wife gave birth to a baby girl in the same year.

The birth of the child only five months after their marriage puzzled him but his wife told him that the baby was born prematurely, so he believed her, the husband said. Read More ..