Under 18, and pregnant by design

For many people, the narrative of teenage pregnancy seems fairly set: A young girl has sex, misses her period, takes a surreptitious pregnancy test and receives the shocking news.

She then must decide whether to terminate the pregnancy or carry the child to term, both options often devastating to deal with. But there is another scenario that is alive and well, despite decades of access to sex education and contraception: Some teenage girls welcome the news.

"I think one thing that people don't realize is that there's definitely some girls [who] intend to get pregnant," said Sharon Lorber, a social worker who runs the Young Families Program at Toronto's Hospital for Sick Children. Over the past 25 years, the percentage of planned teen pregnancies has stayed steady. Last week, Time magazine reported that 17 girls, none older than 16, are expecting babies at Gloucester High School in a small fishing town outside Boston.

While news of the group focused on contested reports of a "pregnancy pact," in which the girls allegedly planned to get pregnant together, the story offers insight into a group of young women who see pregnancy as a calling, not a mistake.

Kendall says "social values of this community differ from the norm."

"It may be questioned how voluntary a young adolescent female's participation in a marriage to an older man in this community would be," he writes.

But since no Bountiful girl has stepped forward to complain, Kendall says there's been no reason for the Ministry of Children and Family Development to investigate.

As for polygamy, the chief medical health officer says that's an issue for the solicitor-general, the attorney-general and the Canadian government -- not health officials.

So, what have we got? A policy of watchful waiting by the ministry that is supposed to enforce the Child, Family and Community Service Act that says "a child needs protection if the child has been or is likely to be physically or sexually abused by the parent or another person and the parent is unwilling or unable to protect the child."

Provinces keep track of adopted babies in their own ways

.................Adoptions have declined largely because single motherhood is no longer stigmatized, and the young, unmarried women who are pregnant are more likely to parent their infants, says Mr. Grand. At the same time, infant adoptions have become rarer because of the declining teenage pregnancy rate.

More recent data from Statistics Canada found that in 1997, with the decline in births to teens, abortion surpassed live births as the most likely outcome of teen pregnancy for the first time. Just over half of pregnant teens chose abortion, compared with just under half opting to give birth. In 1974, about 65% of teen pregnancies resulted in live births, while about 25% resulted in abortion............

"Babies are the new handbag"

Teen pregnancy may be all the rage, but two Calgary teens tell what it's really like to be an underage mom.

Ever since December when 16-year-old Jamie Lynn Spears announced her pregnancy to the world, it's been impossible to escape her. She's now one of several young celebrities-from Jessica Alba, to Nicole Richie, to Lily Allen-  whose "baby bump" is under permanent tabloid scrutiny. Witness also the recent success of Juno, a film that tells the story of a knocked-up teen. To cap it all off, the teenage birth rate's up in both the US and the UK for the first time in a decade-making teen pregnancy a hot topic, as is explored in the current issue of Maclean's.

Nicole Fischer, 17, and Kayla Clark, 18, both got pregnant at age 16 (Fischer gave birth to son Cristian in August. And Clark's baby, William, will be two years old in April). Although over 50 per cent of teen pregnancies in Canada currently end in abortion, both Fischer and Clark opted to keep their babies. They're now students at Louise Dean Centre. The Calgary high school is one of the few across Canada exclusively for pregnant teens and young moms aged 14 to 20.

For the first time in years, more kids are having kids--and not just in movies

When Jamie Lynn Spears, the 16-year-old sister of Britney, announced that she was pregnant last month in OK!, the magazine sold a record two million copies and had to run a second printing of the issue to keep up with demand. How could a wealthy preteen idol with her own hit Nickelodeon show, and the good sister to her chaotic older kin, be just several months away from adolescent, out-of-wedlock motherhood? "I didn't believe it because Jamie Lynn's always been so conscientious. She's never late for her curfew," lamented mother Lynne Spears. She got over the shock in a week, and then Jamie Lynn, ever conscientious, notified the press that she would be having, keeping and raising the baby with her mama in Louisiana. "I'm just trying to do the right thing," said the star of Zoey 101. 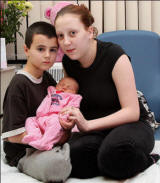 Baby-faced Alfie, who is 13 but looks more like eight, became a father four days ago when his girlfriend Chantelle Steadman gave birth to 7lb 3oz Maisie Roxanne.

He told how he, at 12 years old, and Chantelle, 15, decided against an abortion after discovering she was pregnant.