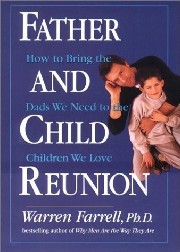 Warren Farrell, Ph.D., is the author of Women Can't Hear What Men Don't Say and The Myth of Male Power. Dr. Farrell taught at the School of Medicine of the University of California in San Diego, and has taught psychology, sociology, and political science at Georgetown, Rutgers, and Brooklyn College. He is the only man elected three times to the board of NOW ( National Organization for Women) in New York City, United States of America.

This is not a paid ad