Why Female Sex Offenders Generate So Much Less Outrage Than Males 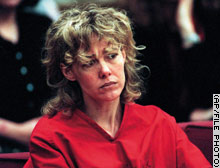 Mary Kay Letourneau with Barbara Walters during her exclusive interview with 20/20.

Sept. 30, 2004 - Mary Kay Letourneau's plans to marry the former student she was convicted of sexually assaulting when he was just 12 years old are shocking, but have generated relatively little public outrage.

After serving seven years for child rape for having sex with a former student - and having two children with him - Letourneau, 42, has reunited with Vili Fualaau, now 21. They are said to be very much in love, and both have said publicly that they plan to marry.

If Letourneau had been a man and Fualaau a female student, residents of Burien, Wash., likely would have protested when the former teacher moved in following her release from prison in August. Letourneau was obliged to register as a sex offender, and her case is very well known. But few people showed up at a neighborhood meeting announcing her move to the community.

There were complaints at the meeting, but those were about the 27 other registered sex offenders - all male - who already lived in the same ZIP code area. One Burien resident said she had no problem with Letourneau moving next door to her because "she's not a threat to my kids."

The lack of outrage surrounding Letourneau's case, some believe, illustrates the differences in how male and female sex offenders - and their victims - are perceived.

"Maybe it has more to do with who the victims are, as opposed to the perpetrators," said Lawrence Driscoll, professor of criminal justice at Wheeling Jesuit University in West Virginia. "As a society in general, we tend to be more protective of females. It's like [society believes] boys will be boys but we have to take care of the girls."

In addition, young boys' crushes on older females - such as baby sitters and teachers - are often treated with a humor and levity not easily found when girls, especially teens, develop crushes on male authority figures.

"When a boy develops a crush on his female teacher, there's a certain amount of laughter. 'Ha, ha, ha. Look who has a secret crush' kind of thing," said Keith Durkin, associate professor of sociology at Ohio Northern University.

"But let me tell you, if there's a male teacher spending an awful lot of time alone with a female student, you can bet there's going to be a lot of people walking by the classroom to make sure nothing inappropriate is going on."

More Than About Sex

Perhaps the rarity of female-on-male sex assault cases fuels their shock value and dulls the sense of outrage.

Male sex offenders, some argue, invite Rmore disgust because their cases are much more common. Men may be still perceived as aggressors while women may be viewed as nurturers - the unlikeliest sex offenders. According to a 2000 report by the National Center for Juvenile Justice, 96 percent of the sex assaults reported involved male perpetrators.

Criminologists have not been able to create a profile of female sex offenders because of their rarity. However, some say female sex offenders, like their male counterparts, are often in positions of power - such as teachers or baby sitters - when they become involved with their victims.

And female sex offenders are often in troubled adult relationships when they become intimate with their victims, and are driven by more than sex, experts say.

Letourneau has said her marriage with her husband was crumbling when she first became involved with Fualaau, who was 12 years old at the time. Debra Lafave, the Florida teacher charged with lewd and lascivious conduct with a minor, was still a newlywed but was having trouble in her marriage when she allegedly had sex with a 14-year-old student.

"In their minds, both Lafave and Letourneau believed that they were in relationships.

They were talking to their alleged victims like girl would talk to her boyfriend," said Durkin. "According to court papers, Lafave drove her alleged victim to McDonald's, they went to a Smoothie King, she told him how she was buying an iPod with a credit card her husband had given her. She was talking to him about the kind of things that couples would talk about.

Still, some experts say, abuse cases involving male victims and female perpetrators may be underreported because of the societal attitudes and myths surrounding boys' sexual development. A sexual assault on a boy by an older female may be misconstrued as a "rite of passage."

"In society, it used to be that with a 13- or 14-year-old male, if his first sexual experience involved a 25-year-old girl who may well have taken advantage of him, his male counterparts may say, 'Hey, you lucked out,' " said Dr. Richard Gartner, who has treated male sex-abuse victims, in a past interview. "It was almost seen as a rite of passage.

"That's the only group that later recalls such experiences as 'lucking out,' " said Gartner. "You don't find that in females."

The Shadow of Notoriety

As for Letourneau and Fualaau, they are moving on with their lives. Letourneau has said she is trying to launch a new career, perhaps in legal research. Both Letourneau and Fualaau have said they hope people will be able to accept their relationship - and maybe the public has, since they've been involved for eight years and are now both adults.

But lack of public outrage aside, the relationship between Letourneau and Fualaau may never escape its scandalous origins, and skeptics will wonder how consensual it really is.

"Yes, he [Fualaau] is an adult legally," said Durkin. "But you wonder whether his view of Letourneau was colored by his experience of her as a child."

This overview paper summarizes recent research on girls who exhibit aggressive and violent behaviours. It defines relevant terms, outlines factors which may contribute to girls' aggression and violence, and presents ideas for preventing these behaviours. A list of resources is also included. 2002, 13p.  Read More ..

Why boys are in trouble

Boys have been painted as the bad guys in the push to encourage girls to succeed, leaving many young men feeling confused and alienated, wondering what they did wrong

According to psychologist and author William Pollack, 'sports are the one arena in which many of society's traditional strictures about masculinity are often loosened, allowing boys to experience parts of themselves they rarely experience elsewhere.'

When Harvard Medical School psychologist William Pollack administered a test to a group of 150 teenaged boys a few years ago, the results were shocking. Read More ..

Smokers need not apply," ran a classified ad for a job in Ireland this past May.

"Why not?" asked Catherine Stihler, a British Labour party MEP, who posed the question on behalf of one of her constituents. Should women not apply, either? Or homosexuals? Muslims? What about high-functioning alcoholics, or fat people?

The answer, from the European Commission that oversees anti-discrimination legislation in the EU, came back to Stihler this month: Smokers are fair game for discrimination.