Mother will not stand trial for drowning death of children 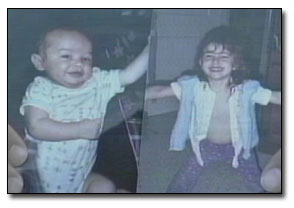 LAMAR - The Lamar woman charged with first-degree murder for the drowning deaths of her two children will not stand trial.

Rebekah Amaya's 4-year-old daughter, Grace Headlee, and 5-month-old son, Gabriel Amaya, were drowned in the bathtub of the family's home in October 2003. Amaya, 34, was found the same day with her wrists slashed in an apparent suicide attempt.

Prosecutors told a Prowers County judge Monday morning they didn't think they would be able to prove she was sane at the time of the children's deaths.

Amaya pleaded innocent by reason of insanity last March to drowning the children.

A court official said the trial was to be dropped in exchange for Amaya admitting guilt.

SHE PARTIED AS DAUGHTER LEFT TO DIE IN HEAT

SINGLE MOM Clara DaSilva admitted yesterday she danced the night away while her 2-year-daughter was dying of dehydration in a sweltering apartment. Tiny toddler Adrianna Maria DaSilva was abandoned for at least 33 hours in a 35C room before her mom discovered her dead on Sept. 9, 2002.

Clara DaSilva, 24, pleaded guilty to manslaughter. Justice David Watt will sentence her shortly after Jan. 17 following a five-day trial with one contested fact -- the allegation that her purse, with keys and cash, was stolen at a club the day of her child's death.   Read More ..

Mothers Who Kill Their Children

"The board would have looked at the risk and obviously found a low risk to reoffend," Carol Sparling of the National Parole Board said Wednesday.

Mother Charged with Killing Her Baby

"Murder in the nursery"
Australian mom killed her 4 babies

It seemed a tragic coincidence - at first.

Still, it was after their fourth baby died before Australian police suspected something was terribly wrong.

In Sydney's New South Wales State Supreme Court this week, Kathleen Folbigg, 35, was found guilty of killing all four of her babies.

The jury's work would have been made much easier if they had been allowed to read Folbigg's entire secret diary. In it, she practically confesses to following in her dad's deadly footsteps.

"Obviously I am my father's daughter," the Australian woman wrote in her diary Oct. 14, 1996, having already killed three of her four children.

"But I think losing my temper and being frustrated and everything has passed. I now just let things happen and go with the flow. An attitude I should of had with all my children, if given the chance, I'll have it with the next one."

Folbigg was pregnant at the time with her fourth child. She would go on to kill her as well.