Suddenly, boy-bashing is all the rage for teenage girls 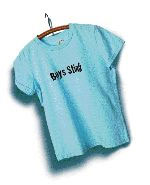 CALGARY - Skim through the closets of today's trendiest teenage girls, and you just may find a T-shirt or two, maybe a handbag or a wallet bearing a slogan that makes fun of, well, boys.

Gone are the days when a hip teenage girl did whatever she could to cultivate a boy's attention. Gone is the sucking up. Gone is the flattery.

Instead, girls across the continent (and in England, too) are scooping up T-shirts and handbags, fridge magnets, lip balm and even slippers sporting such sayings as "Boys are stupid -- Throw rocks at them."

And even hoity-toity Holt Renfrew is getting in on the joke, with a line of Boys Stink T-shirts (in baby blue). (The label offers Yoga Stinks, Diets Stink, Fashion Stinks and Love Stinks tees, too.)

Whether you consider the price or the slogan, it's all enough to make a politically correct parent drop his soy milk.

But Adrian Thacker, Holt Renfrew denim specialist, says that in case one takes the front slogan too seriously, each tee reads, "Just kidding" across the back.

And so far, they're selling well, he says.

"The Boys Stink one, it's the teens and the younger crowd, they're usually giggling and snickering, and all saying how they want to get them for all their friends."

Another leader behind the trend is David and Goliath, a Florida-based clothing giant (pardon the pun.)

The company has found a hit market across North America with its nasty-funny line of T-shirts.

"Lobotomy: How to Train Boys," reads one. Another says, "Boys lie; make them cry."

Incidentally, the creator of David and Goliath, Todd Goldman, is a boy. (OK, a semi-grown up boy.) Anyway, he told one newspaper, the News and Observer, that "it's just fun, interesting stuff that makes you laugh.

Not everyone, however, agrees with him.

In January, California talk show host Glenn Sacks launched a campaign against a Los Angeles clothing chain that carried the T-shirts. Within 24 hours, the 32-store chain had agreed to pull the offending products from its shelves.

A few days later, Sacks launched a similar campaign against Universal Studios, which then pulled the David and Goliath T-shirts from its stores, too.

"It really angers me that our boys have to confront this kind of bigotry. It also angers me that we're telling girls that it's OK to hate boys," Sacks said on his radio show, according to www.mensnewsdaily.com.

"When males insult females we call it 'woman-hating' and 'misogyny.' When females insult males, apparently it's OK. No more.quot;

On a recent trip out to a local mall on a Saturday evening, I was picking through the T-shirts for teenagers when I spotted one with the words "Boys are Stupid, Throw Rocks at Them."

I'm used to seeing variations on the Girl Power theme when I'm in these stores but I was shocked to see something so negative about boys. As the mother of both a boy and a girl, I felt sick when I saw the slogan. I felt even worse when I logged onto the website of the retailer who sells these products. They are designed and manufactured by a clothing company called David & Goliath, based in Clearwater, Fla.

I was not happy to see a list of so-called funny slogans: Boys Lie, Poke Em in the Eye; Boys are Goobers, Drop Anvils on Their Heads; Lobotomy, How to Train Boys; If Boys are So Tough, Why are They So Afraid of Knives (this with a picture of a boy running away with knives in the air); or Tape Can Be Fun, a T-shirt with a boy's mouth covered in tape. One of the T-shirts is actually featured in the February issue of YM magazine this year.