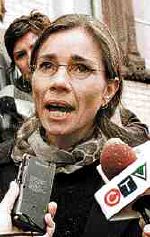 STRATFORD, ONT. - A woman who became an international fugitive when she abducted her seven-year-old triplets and fled to Mexico was found not guilty by reason of necessity yesterday.

Carline Vandenelsen, 39, shook uncontrollably as the jury foreman read out the verdict. Afterward, she sobbed in the arms of her mother and sisters.

"I guess I'm just elated that justice is served," she said later on the steps of the historic Stratford courthouse. "I acted in the best interests of my children. The circumstances were such that I had to act in this way and in no other way."

Ms. Vandenelsen, who now has access to her children for one day on alternate weekends, said she will continue her efforts to gain greater access to them at a hearing to be held this autumn.

A former high school teacher who is now unemployed, she said she is considering a career as a family mediation specialist.

Her former husband, Craig Merkley, 45, a water quality specialist with the Upper Thames River Conservation Authority in London, said the verdict has killed his faith in the justice system.

"I think that they've just declared open season for anyone who wants to abduct their children," he said. "It sets an absolutely incredible precedent."

It seemed like a slam-dunk case. Ms. Vandenelsen admitted she had abducted Peter, Gray and Olivia, triplets conceived through in-vitro fertilization and born to the couple on New Year's Day, 1993. She admitted hiding them in the trunk of her 1989 Hyundai Sonata to smuggle them across the U.S. border.

"We cleaned it out. We made little beds. They had their blankies, their pillows. I gave them flashlights," she said.

In the weeks prior to her flight from Stratford on Oct. 14 last year, she cashed in her RRSPs and the children's education funds and cleaned out her bank account, withdrawing $56,000. She confided her plan to her mother. And she was found living with the children in Acapulco in January, 2001.

But under a provision of Canada's Criminal Code, parents who abduct their children to protect them from imminent harm can be found not guilty by reason of necessity.

In order to reach a not-guilty verdict, the judge or jury must find that the parent honestly believed their children were in danger of harm; that in an objective sense abduction was necessary; and that the harm inflicted by the abduction was proportionate to the harm being fled.

The jury hearing Ms. Vandenelsen's case was also asked to consider what other remedial steps she was aware of or could have taken in the circumstances.

Ms. Vandenelsen testified that she fled with the children because she feared she was about to have her access to them terminated at a hearing scheduled for Oct. 23. She argued that being deprived of their mother would cause the triplets irreparable harm, and thus, she was trying to protect them by spiriting them away.

Since she and her husband separated -- in 1995 according to Mr. Merkley and in 1996 according to Ms. Vandenelsen -- her access, which had at first been generous, had been significantly reduced by the courts. In March, 2000, the judge presiding over the couple's custody trial awarded her access on alternate Saturdays and two weeks in summer, but warned he might terminate her access entirely, at a hearing to be held in October.

What the jury did not hear was that custody of the children was awarded to Mr. Merkley because the judge had serious reservations about Ms. Vandenelsen's conduct as a mother.

"There is clear evidence in this case of the existence of personality traits, which, if not controlled by the defendant, have the potential of destroying the emotional well-being of the children," wrote Justice Robert Abbey of the Ontario Superior Court of Justice.

He based his conclusion in part on telephone conversations between Ms. Vandenelsen and her children that were tape-recorded by Mr. Merkley. Judge Abbey described the taping of the calls as "totally unacceptable" and even "offensive."

Nonetheless, one psychiatrist who analyzed the tapes for the court was so appalled at the way Ms. Vandenelsen emotionally abused her children that he concluded her access should be reduced to special occasions only.

The tapes have been sealed by the court and their contents cannot be made public.

Judge Abbey was still reluctant to terminate Ms. Vandenelsen's access to the children. He reserved a final decision on her access until Oct. 23. He said that while he had not ruled out terminating her access, he would base his decision on her behaviour until then.

"She has an energy about her which, if channeled appropriately, can be an important contributor to the enrichment of the children's lives," he wrote.

At her trial on the abduction charges, Ms. Vandenelsen testified she felt she was a good mother who enjoyed an excellent relationship with her children. She said she did not see how she could "improve." Feeling that she could never win in the courts, Ms. Vandenelsen decided her only recourse was to flee.

In an unusual charge to the jury, Justice James Donnelly appeared to endorse Ms. Vandenelsen's position.

"Ms. Vandenelsen acted in developing circumstances and a swirl of powerful emotions," he said in his charge to the jury. "She was involved in a high-stakes contest. At issue was a precious asset, the formative years and the welfare of her children."

After deliberating for 11 hours, the jury agreed with Ms. Vandenelsen's version of events.

Clay Powell, her lawyer, was clearly jubilant after the verdict. Fellow lawyers had told him the case could not be won.

He said he knows of only three other similar cases in Canada since the abduction charge and its defence were added to the Criminal Code in the early 1980s. One woman was conditionally discharged, another was acquitted and one man was convicted.

"That's no floodgate, is it?" he said. "The sections have been there [since the 1980s] and people aren't running off with their kids contrary to court orders."