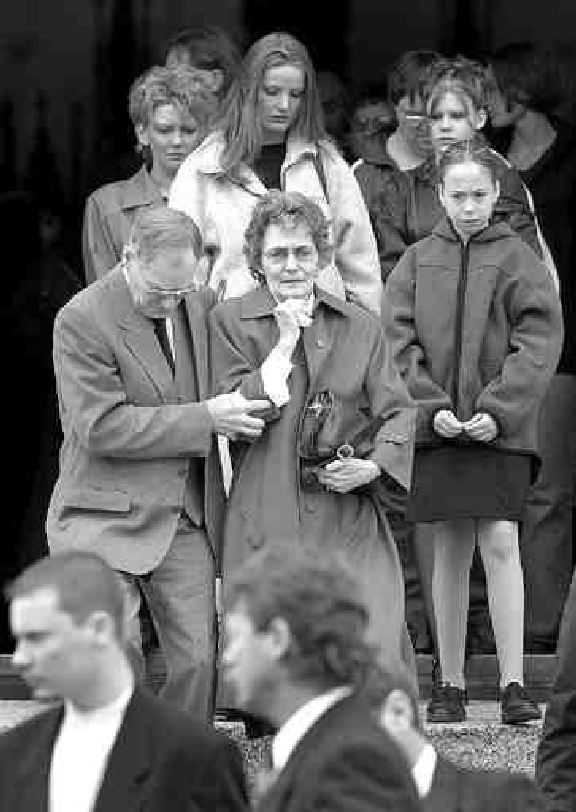 Fred Greenslade, National Post
Lillian White, centre, and family members watch as the coffin of her son, Darrin White, who killed himself, is carried to a hearse yesterday. "It didn't have to happen," relatives at his funeral said.

In death he has become a poignant symbol of family courts gone awry, of a divorce system run by people with closed minds, hard hearts and deaf ears.

Across the country last evening, activists held candlelight vigils in memory of men such as Darrin. During his funeral Mass, Father Leo Fernandes of St. Augustine's Roman Catholic Church urged Darrin's friends to continue the struggle to which he succumbed.

Like those who completed Puccini's last opera after his death, Father Fernandes said people close to Darrin should ask themselves: "What are you going to do about it? Hopefully, there is more.It is up to you, his friends, to accomplish what he was unable to. If his dream was to challenge the scales of justice in our country, then so be it. Do it for his sake."

Darrin wasn't a complicated man. He liked taking nature walks and enjoyed cycling. He read books about the outdoors and loved animals. He was a certified locomotive engineer who earned his living driving trains first for Canadian National, then the British Columbia railway.

When his marriage fell apart in January, Darrin found himself in a situation shared by many men. While he had worked long hours doing what society told him a father was supposed to do -- bringing home the bacon -- his devotion became a strike against him.

In a country that still treats children as prizes to be "won" in divorce court rather than as human beings entitled to close contact with both of their parents, the fact that Darrin had not spent as much time with his children as his homemaker wife was deemed sufficient reason to award her sole custody.

Suddenly alone, compelled to leave his home with less than 48 hours' notice, expected to come up with rent money as well as lawyers' retainers, and missing shifts at work due to court dates, Darrin found himself criticized for not paying his estranged wife (who, unlike him, was eligible for social assistance) child support during this chaotic period.

Perhaps, during these weeks, it began to dawn on Darrin how vulnerable his relationships with his children, aged five , nine and 10 had now become (his oldest child, aged 14, from a previous relationship lives with her mother in Saskatchewan). Perhaps other divorced dads told Darrin of former wives brainwashing their kids against them, frustrating court-ordered child access while suffering no legal consequences, and behaving as though the kids should call every new boyfriend "dad."

All divorced mothers don't behave this way, of course, but enough do to make such fears reasonable. Yet society provides no services to help loving, responsible, traumatized dads deal with such stresses.

Researchers have known for decades that divorce is much harder on men than it is on women. We know that men who undergo marital breakdown experience significantly higher rates of suicide, mental illness, physical health problems and accidents than do women. Yet we remain indifferent to their anguish.

Suicides directly related to divorced men's harsh treatment at the hands of courts and governments have been taking place for at least a decade in this country. In the words of Peter Ostrowski, an activist with the Prince George-based Parent-Child Advocacy Coalition, who tried to help him in the weeks preceding his death, men such as Darrin "have nowhere to turn. They are an ignored part of society. If they're older and they find themselves in such situations, they develop health problems. If they're young, they'll often react with either violence against others or violence against themselves."

At Darrin's funeral yesterday, his relatives returned to one theme again and again. His death was so unnecessary, they said. So pointless. "It didn't have to happen," they said.

To echo Father Fernandes, "So what are we, the Canadian people, going to do about it?"

Guidelines on treating childhood depression will be published next year. Professor Kendall says a lot Read More ..eds to be done to treat the illness.