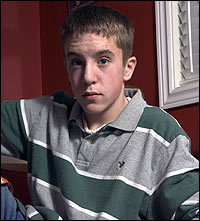 Jeremy Patfield, 15, of Whitby, says he was suspended after a tour of Rideau Hall in Ottawa.

A high school in Whitby has lifted its three-day suspension of a student whose question about Gov. Gen. Adrienne Clarkson's spending prompted a tour guide to abruptly end a school tour of Rideau Hall, the boy's dad said today.

"I had a meeting with the school — the superintendent, the principal and the vice-principal," said Dan Patfield, father of the 15-year-old high school student.

"After everything the media did ... the school has lifted the three-day suspension."

Jeremy Patfield was touring the Governor General's official residence with about 60 students on Tuesday when he spotted Clarkson and asked: "Is that the woman that spends the money on the Queen when she comes?"

The question was uttered within earshot of Clarkson. A tour guide who overheard the teen's comment immediately ended the tour.

"The Governor General's staff has apologized to the school and I guess we are expecting a call from the Governor General herself," said Patfield from his Whitby home where he, his wife and son were trying to get some rest after a couple of sleepless nights and a media storm.

"He was sorry for what he did say in the Governor General's home and he did say it to a second party and he said he would pick a different form if he had to do it all over again."

Clarkson defended the boy's — and anybody's — right to ask questions about how government money is spent.

"Had I heard the question, I would have answered it," the Governor General told CBC television this morning. "I believe that everybody — kids, adults, people coming from other countries — have the right to ask anything they want to when they come here."

"I'm sorry I didn't hear and I'm sorry about the reaction to it. Apparently the tour was cut somewhat short and I'm sorry that the boy felt that his innocent question about the expenses of the Queen when she comes to Canada were not answered because they very well can be."

She then went on to explain that the expenses of the queen are paid by the Department of Canadian Heritage when she comes to the country as she did in 2002 and as she will be doing in 2005 to celebrate the 100th anniversary of Saskatchewan and Alberta.

"It's a very simple answer."

A safeguard for women? An insult to women? Canada's infanticide law, like the crime itself, ignites strong emotions on both sides. Just how did the legislation evolve and why do some legal experts want it scrapped?

The words rang out in a Wetaskiwin courtroom, Ryan Effert's verbal attack on the eight-woman, four-man jury that had just found his 20-year-old sister, Katrina, guilty of murdering her newborn baby.

Ryan Effert was the first to lash out at the jury, but his angry words have been echoed by many others. Defence lawyers, legal experts, pundits and members of the public have all expressed upset and bewilderment at the decision on Sept. 26.  Read More ..

For six decades, women who have killed their babies have typically benefited from reduced sentences under our infanticide law because of the belief their minds were disturbed from giving birth.

University of Alberta law professor Sanjeev Anand wonders why only mothers who kill their infants get a break.

Fathers and adoptive parents should have a shot at judicial compassion as well, he argues in a provocative article in the Alberta Law Review.

There is little evidence of a direct connection between the physical effects of childbirth or lactation and the onset of mental disturbances in women, he declares.

Rather, poverty, isolation and other social stresses are more likely causes of the mental illness some women experience after childbirth, Anand argues.

And if mothers are vulnerable to mental breakdowns because of the socio-economic burden of child-rearing, surely fathers and adoptive parents risk the same stress and should also be able to use the defence of infanticide, he says.

"Once the law recognizes biological mothers who kill their children may commit these acts because of the effects of mental disorders caused by social stresses, the law must also acknowledge all parents are susceptible to such influences," Anand writes. Read More ..

Infanticide is justifiable in some cases, says UK ethics professor

One of British medicine's most senior advisers on medical ethics has provoked outrage by claiming that infanticide is "justifiable".

Professor John Harris, a member of the British Medical Association's ethics committee, said that it was not "plausible to think that there is any moral change that occurs during the journey down the birth canal" - suggesting that there was no moral difference between aborting a foetus and killing a baby.  Read More ..