Woman found not guilty of abducting her triplets

`It sets an incredible precedent': Father

STRATFORD - A Stratford mother was jubilant and her ex-husband was shaken yesterday after a jury acquitted her of abducting her triplets in violation of a custody order.

NOT GUILTY: Carline Vandenelsen was jubilant yesterday after her acquittal on charges of abducting her three children.

Jurors returned the not guilty verdict an hour into their second day of deliberations. It shook Craig Merkley, the father of the 8-year-old triplets.

"They just declared open season (for) anyone who wants to abduct their children," Merkley said with his new wife, Jan Searle, by his side.

"It sets an incredible precedent. Anyone who feels they should take their children and run has now got the tools to do it. There's no consequence."

But Vandenelsen said that wasn't the message the eight men and four women jurors sent.

"No, the message is we have to take a closer look at the goings-on in the family court of law," she said. "Power and politics and personal agendas don't belong there because children suffer."

Vandenelsen disappeared with the triplets on Oct. 14 of last year during an access visit. She fled to Mexico because she feared she was going to lose all access to the children when she returned to court Oct. 23 for another hearing. A judge had told her in March that terminating her access was a possibility. 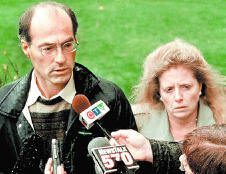 In acquitting her, jurors accepted her defence of necessity. Vandenelsen argued she had to take the children to protect them from the emotional and psychological harm they would suffer by not being able to see her.

"I think the jury heard that my actions spoke to the love I have for my children," she said.

During her trial, jurors heard she hid the triplets in the trunk of her car as she crossed from Canada into the United States. They settled in Acapulco, Mexico, where she told the children they weren't going to go home for a long time.

Merkley denied yesterday he was trying to get Vandenelsen's access cut off permanently. "I never sought to terminate her access (permanently)," he said. "I said, after a period of time, there would be access."

He said many concerns that he presented at the December, 1999, trial that ended in him getting custody never came out at the abduction trial.

`I think the jury heard that my actions spoke to the love I have for my children.' - Carline Vandenelsen

He declined to say exactly what concerns he has about Vandenelsen's parenting.

During the abduction trial, jurors heard he was worried about the children's aggressive behaviour after being with their mother, as well as concerns about their safety while with her.

Merkley said the jury's decision has tied the hands of police. "If there's an abduction, what's the point of going to try to bring the abductor back? They're going to get off," he said.

He also said the acquittal was an invitation to Vandenelsen to scoop the kids again.

Asked if she would, Vandenelsen said, "No, I'm hoping this verdict will take me into a family court to show I am acting in the best interests of the children."

Vandenelsen will see her children again next weekend. Earlier this month, a judge gave her access every second weekend for overnight visits.

Despite her victory, she said, "I still have a way to go because I'm not putting my children to bed, and that's my goal."

She has said she won't be satisfied with anything less than custody. She and Merkley return to court again late next month. Merkley rejected suggestions of any shared parenting arrangement.

Crown prosecutor Henry Van Drunen wouldn't say whether he will appeal the verdict.

Merkley was critical of Mr. Justice James Donnelly's charge to the jury. "He essentially said you should find her not guilty," Merkley said. "Everyone felt it was incredibly one-sided. He completely minimized the crown's defence and he maximized the defence's defence, and added his own commentary to it."

Vandenelsen said she is thinking of going into the field of mediation for divorced families.

She said since starting her own Web site, she's received many e-mails from parents "who've hit a wall" while fighting custody battles in the courts.

Asked what he planned to tell the triplets last night, Merkley said he wasn't going to say anything.