In a free society, shouldn't adults have the right to make fools of themselves in open court? After all there are no legal protections against embarrassment. Court can be closed and publication bans ordered when there is a basis in law. It cannot happen as a safeguard against hurt feelings.

And, in open court proceedings, hurt feelings and embarrassment occur on a regular basis. Part of it is intentional, as in the shame associated with a public dressing-down. Social shunning still has the power to alter behaviour.

In other cases, the humiliation is a side effect of having one's personal business aired in public. But it was determined long ago that the benefits of open tribunals in a democratic society far outweigh the potential for humiliation of the participants, however unwilling.

Of course, another side effect of open courts is that it's possible those involved might not like interpretations of proceedings. In some cases, those offended can seek redress in libel laws or complaints to the press council. There is, however, no legal remedy when you have a difference of opinion.

All this is a long-wonded way of edging gingerly into two incidents last week involving members of the judiciary and our reporting staff, one with far greater implications than the other.

In a phone call the next day, McNish criticized Dunphy for a report which was, among other things, "snarky" and "contemptuous." McNish finished by saying he didn't intend on taking the matter any further.

Good. It is difficult to imagine how it could be taken further. To my knowledge, there is no legal precedent for hauling reporters in to face the Wrath of judges who disagree with their tone.

The second incident was infinitely more troubling. In that one, Michael Clement, another senior reporter, was excoriated by Mr. Justice Lucien Beaulieu of the Ontario Court.

Clement's offence, it appears, was that he was attempting to cover a messy divorce case in Beaulieu's court. The man, a professional, had fallen behind in his large support payments. He was arguing he couldn't afford that amount and still have enough to live on. His wife was insisting the arrears be brought up to date.

The case highlights the trouble balancing the social issues of child support and parental responsibility against basic economic realities. The man's side was content to have the media present while the wife objected strenuously - through her lawyer - to any publicity.

To Celement's utter astonishment, he was ordered to his feet and asked to explain his presence. Beaulieu then enquired about his reporting credentials. When Celement explained he had some 20 years in the business, Beaulieu then proceeded to address him as "Mr. Experienced Reporter."

The interrogation didn't stop there. Beaulieu berated Clement for nervously curling up his hand in his pocket before moving on to say he would not tolerate "sensational snippets" from the trial appearing in print, especially since there were children involved.

With all due respect to Justice Beaulieu ( who enjoys a fine reputation through his decisions in the Roch Therriault case) he oversteps himself.

To go back to the beginning, open court should not be determined on the potential of embassassing the particpants.

It is difficult to explain Beaulieu's attitude to Clement. Perhaps he was having a bad day. But Clement had a right to be there and a right to report without interference from any of the participants, even the judge.

So, should adults have the right to make fools of themselves in open court? Of course. It is the sole preserve of the complainants and defendants? Or does it extend to those sitting on the bench? 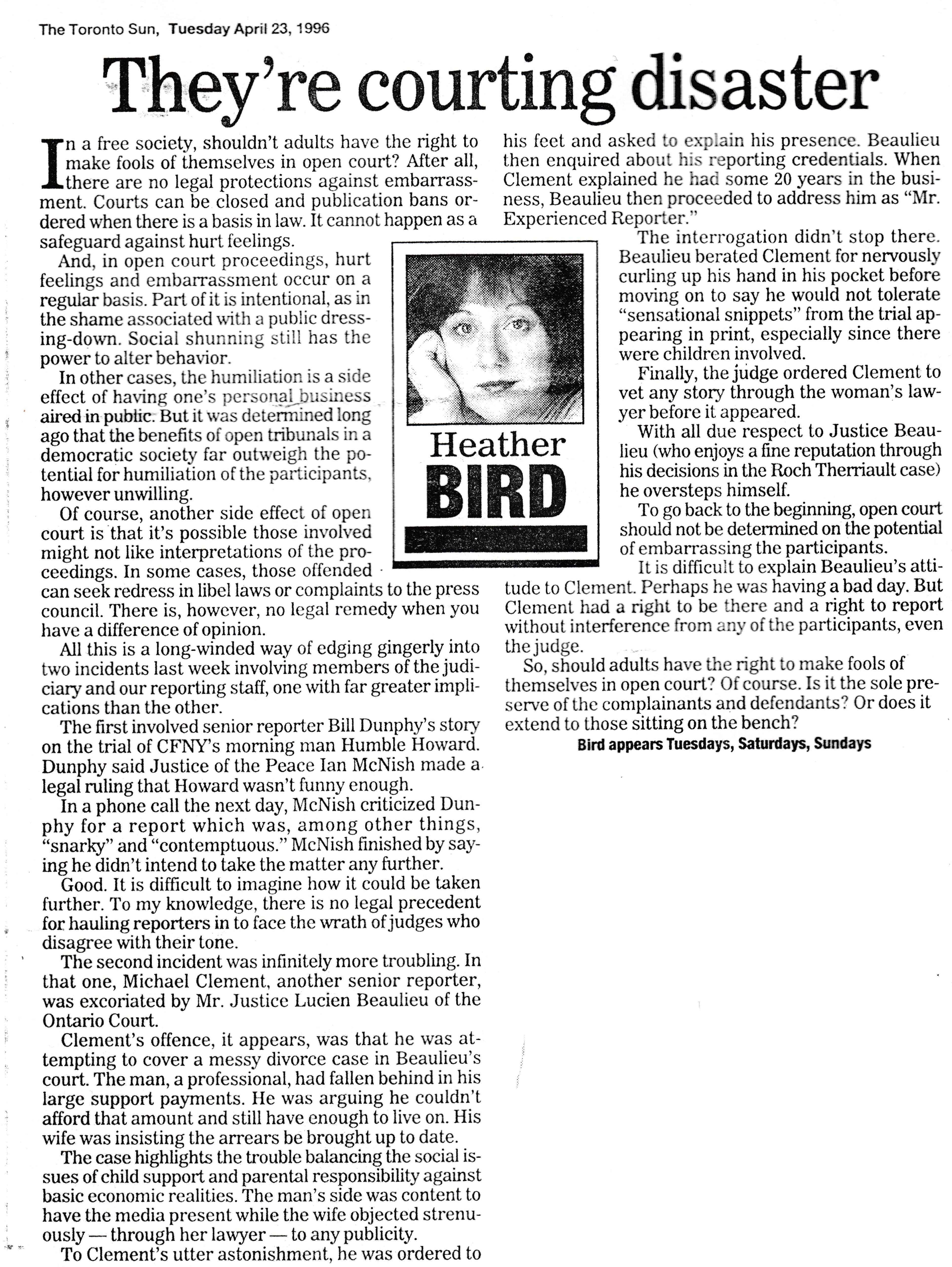 Pediatricians turn away from circumcision

ATLANTA (CNN) -- American pediatricians are turning away from the practice of routine circumcision, concluding that doctors have no good medical reason to perform the procedure.

The United States is the only country in the world that routinely removes the foreskins of infant boys. Critics of circumcision got additional ammunition Monday from the American Academy of Pediatrics, a leading medical organization.

The academy concluded the benefits "are not compelling enough" for circumcision to be routinely administered.

A newborn winces in pain after a circumcision

Monday's statement, published in the March edition of the journal Pediatrics, was the academy's first in 10 years on the practice. But in recent years, medical societies in Canada, Britain and Australia have come out in opposition to routine circumcision.

Critics have long contended that removing the foreskin from the penis is traumatic, medically unnecessary and may reduce sexual pleasure later in life. As one critic, Dr. George Denniston, put it: "Who are we to question mother nature?"

Canadian researchers, whose study was published in this week's Journal of the American Medical Association, studied the heart rates and crying patterns of babies during different stages of circumcision.

In fact, in the study they found the babies suffered so much trauma that they stopped the study part way through.

The results were so compelling that they took the unusual step of stopping the study before it was scheduled to end rather than subjecting any Read More ..bies to circumcision.

One baby stopped breathing for 25 seconds from the trauma of having part of his foreskin severed.  Read More ..