By targeting protesters for searches and not letting them proceed, York Police violated Charter rights in June 2010, the appeals court decides. 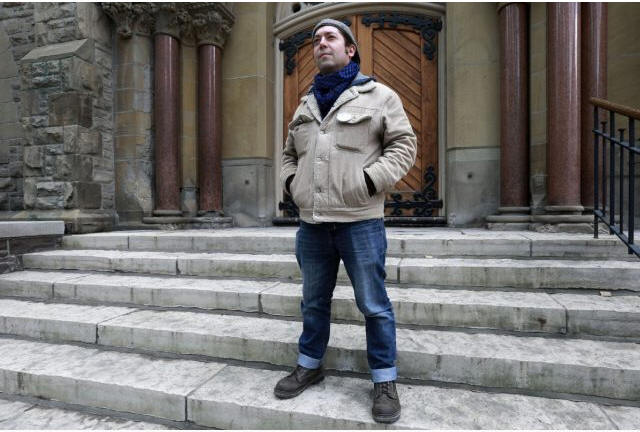 Paul Figueiras stands at the entrance to St. Andrew's Church on King St. W., near where he was stopped by a York Region police officer on June 27, 2010, who demanded that he submit to a search and told him, "This ain't Canada right now. ... There is no civil rights in this area." Nearly five years later Figueiras has found vindication in an appeal court decision saying his Charter rights had been violated.

In a decision being hailed as a victory for civil liberties, the Court of Appeal has ruled that a group of G20 demonstrators who were prevented from approaching the security fence unless they submitted to a search had their Charter rights violated.

"It's a victory for peaceful demonstrators," said Kiel Ardal, one of the lawyers who argued the case. "We hope that police change their behaviour because of this ruling."

The altercation between protester Paul Figueiras and a group of York Region police on June 27, 2010, gained notoriety thanks to a video posted to YouTube in which Sgt. Mark Charlebois says: "This ain't Canada right now â€¦ There is no civil rights here in this area."

In his suit, Figueiras asked for no money, just a declaration that his rights had been breached.

Last year, a Superior Court judge denied his claim, but that ruling was overturned by a three judge Appeal Court panel in a decision released Monday.

"The actions taken by Sgt. Charlebois and his team were not reasonably necessary and had little, if any, impact in reducing threats to public safety, imminent or otherwise," wrote Justice Paul Rouleau, on behalf of justices Katherine van Rensburg and Gladys Pardu. "The respondents violated Mr. Figueiras's common law right to travel unimpeded on a public highway, and â€¦ they also violated his Charter right to freedom of expression."

On the Sunday of the G20 weekend in June 2010 - the day after "Black Bloc" protesters smashed windows and set police cars on fire - Figueiras and a group of friends headed downtown with a sign and pamphlets advocating veganism and animal rights. They were stopped by a group of York Region Police officers at the corner of King St. W. and University Ave. and told that they could not proceed unless they allowed their bags to be searched.

When Figueiras declined, the commanding officer, Charlebois, put his arm around him and said: "You don't get a choice."

Charlebois then pushed Figueiras away and told him to "get moving."

For this, the judges ruled that Charlebois had also committed battery.

Even though it took almost five years to obtain, Figueiras says the ruling was worth the wait.

"This case is not just about my rights; it's about the rights of all Canadians," he said. The police "abused their powers to intimidate and to bully peaceful demonstrators during the (G20) summit, and I just wanted to do something to try and ensure that these types of abuses don't happen again."

While the decision's significance shouldn't be overstated because it was based heavily on context, it still constitutes a victory for individual liberties in Canada, said Osgoode Law School professor Alan Young.

"In the last 20 years, there's been a gradual increase in police powers â€¦ This is a little bit of a retreat and more reflective of a fundamental view of what our rights are," said Young, who wasn't involved in the case. "Just because you have security concerns doesn't mean you can infringe upon people's Charter rights."

The Court of Appeal judges ruled that Charlebois wasn't acting under orders and had arbitrarily decided that suspected demonstrators were to be searched.

The previous Superior Court ruling had compared the situation to the searches conducted at airports or courthouses. However, the Appeal Court judges disagreed, because Charlebois didn't search everyone and only targeted protesters.

"Stops that target an identifiable group must be 'carefully scrutinized' â€¦ The basis for targeting would-be demonstrators, as a group, is weak and does not, in my view, rise to the level of reasonable suspicion," Rouleau ruled, adding: "We want to be safe, but we need to be free."

While Supt. Mark Fenton awaits the results of his discipline hearing, few police officers have been held accountable for the mass arrests and "kettling" during the G20.

The only officer to be criminally convicted for his actions that weekend, Const. Babak Andalib-Goortani, will not serve any jail time.