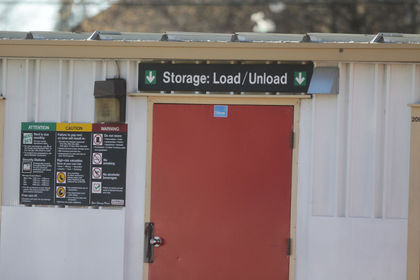 WINNIPEG - Winnipeg police now say the bodies of six babies were found in a U-Haul locker Monday afternoon and have made an arrest in connection to the horrifying incident.

Police provided an update Wednesday morning and said it was not three or four infant bodies as originally thought that were found in the storage locker.

Andrea Giesbrecht, 40, of Winnipeg, who police say also goes by Andrea Naworynski, has been charged with six counts of concealing the body of a child and one breach of probation. She was arrested at a home, police said.

The offences are alleged to have occurred between March 7 and Oct. 20.

Police spokesman Const. Eric Hofley could not provide much more detail on how the babies were killed, why they were there, or what their relation is to the accused.

Hofley said the case has not been turned over to the homicide unit because more details still need to come to light on many lingering questions.

"So many of the questions that I expect you have will be answered forensically," Hofley said. "As you can see by the charges laid, right now we don't have any information regarding a homicide."

"It's early in the investigation ... some of these questions may never be answered," he said.

Court heard Giesbrecht approached a 73-year-old woman, a neighbour of her deceased parents, and asked for a loan to pay off the taxes on the family home.

Over the course of four visits, the woman paid Giesbrecht a total of $7,850.

"My husband warned me not to (loan her the money) but she always came by when she knew he wasn't home," the woman wrote in a victim impact statement.

Giesbrecht wrote the victim two cheques to satisfy the loan, both of which were drawn on a closed account.

Giesbrecht's fraud was motivated by a long-standing gambling addiction, court was told.

As of her sentencing date, Giesbrecht had made no effort to repay the victim, Crown attorney Manoja Moorthy said.

"It's simply unacceptable to say that all of this is to be blamed on an addiction," Moorthy said. "She is 40 years old. She certainly knows the impact this has had on the victim."

ISLE LA MOTTE, Vt. A Montreal mother recovering from alleged self-inflicted wounds will be charged in the coming days with murdering her 8-year-old son, whose body was found in Lake Champlain, a Vermont state attorney said today.

I am going to prepare a charge of first-degree murder, Grand Isle States Attorney David Miller said in a telephone interview. Read More ..

Xuan (Linda) Peng has been found guilty of second-degree murder in the drowning death of her 4-year-old autistic daughter Scarlett in a bathtub in the family home.

Scarlett Chen was discovered unconscious by her distraught father David Chen in the tub on the second floor of the family's townhouse on Rosebank Dr., near Markham Rd. and Sheppard Ave. E. on July 12, 2004.

Peng told police that she had put their daughter down for a nap in the adjoining bedroom, and had no idea she had climbed into the bathtub, which the woman had filled with water to clean some kitchen utensils.

TYLER, TEX. -- A woman accused of fatally beating two of her sons with rocks spent Mother's Day sobbing and muttering in a jail cell.

Deanna LaJune Laney, 38, remained on suicide watch yesterday at Smith County Jail, where she was held in lieu of a $3-million (U.S.) bond on capital-murder and aggravated-assault charges.

Ms. Laney is accused of killing Joshua Laney, 8, and Luke Laney, 6, and injuring their 14-month-old brother, Aaron. The toddler remained in critical condition yesterday at a Dallas Hospital.

In a call to emergency workers early Saturday, Ms. Laney reported that she had just "bashed their heads in with a rock," Sheriff J. B. Smith said. Read More ..

The boy's body was found at 10:23 p.m. in the bay after it was spotted near the Embarcadero Resort, police said. Read More ..