A new Families Tribunal will encourage separating parents to agree to joint custody of their children under a two-year trial endorsed by federal cabinet. 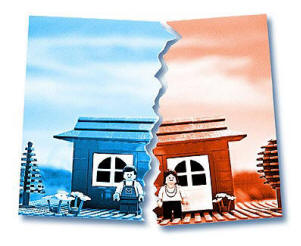 The tribunal, which aims to reduce the adversarial dimensions of the Family Court, will comprise child experts, psychologists and a judge or senior lawyer.

During the two-year pilot study, it will complement the Family Court. If found to be successful, it could ease much of the court's workload.

Cabinet has been considering for two months plans to encourage shared custody after Government MPs were inundated by claims from aggrieved fathers that the current system discriminates against them.

Although some cabinet ministers have doubts that the tribunal will work, cabinet has authorised the Attorney-General, Philip Ruddock, to consult backbenchers on the trial.

But the pilot may face resistance from some Government backbenchers who believe the tribunal does not go far enough.

Many of them want to throw lawyers out of the divorce process and replace them with a shopfront - within Medicare or Centrelink offices - where separating parents could get advice, paperwork and referrals to mediation if they could not agree on arrangements for the children. Only after all these measures failed would they go to a Families Tribunal.

With cabinet approval, the trial is all but certain to go ahead. But it would be "hard to understand", according Kay Hull, the Riverina National MP who headed a six-month public custody review analysing almost 2000 submissions. Her parliamentary committee's report was finished on its tight deadline, but four months later, cabinet has yet to respond fully to its recommendations.

Ms Hull has arranged to meet Mr Ruddock today, but says no one has contacted her committee about a pilot scheme. "'I'd be asking them to explain," she said, arguing the committee's proposed overhaul was envisaged as a complete system. "There is an absolute commitment to this. We are not going to lie down."

The first step in the overhaul proposed by the committee would be the shopfront. Parents who failed to agree on a custody plan during counselling would go to a Families Tribunal, which could draft binding agreements.

The tribunal would be informal, with very little documentation and no lawyers.

But with cabinet split on the tribunal scheme, the shopfront and mediation recommendations have been left in limbo. There has been no action either on its plan to reform child support payments.

"There has been no discussion of the single entry point [the shopfront]," Ms Hull said.

She said this first point - to keep parents from going straight to a lawyer - was critical to avoiding the acrimony that has such devastating effects on children.

If the Family Court administered a pilot of the Families Tribunal, "that's a total duplication," Ms Hull said.

Lawyers have lobbied against the tribunal scheme, arguing it will leave people vulnerable without legal representation - and that it was outside the committee's terms of reference.

The inquiry was established to consider a legal presumption of 50-50 shared custody after divorce, but opted instead to recommend "shared parental responsibility".

Bacolod Regional Trial Court Judge Ray Alan Drilon has annulled the marriage of a Negrense couple after a DNA test showed that the child borne by the wife was not the biological offspring of the husband who works abroad.

The family court judge ruled that the marriage of the couple, whose names are being withheld by the DAILY STAR on the request of the court, was null and void.

Due to fraud committed by the wife in getting her overseas worker husband to marry her, properties acquired during their marriage are awarded in favor of the husband, the judge said in his decision, a copy of which was furnished the DAILY STAR yesterday.

The complainant said he was working as an electronics engineer in the United Arab Emirates and on his return to the Philippines in 2001, his girlfriend of 10 years with whom he had sex, showed him a pregnancy test result showing that she was pregnant.

On receiving the news he was overjoyed and offered to marry her. Shortly after he went to Saudi Arabia to work, and his wife gave birth to a baby girl in the same year.

The birth of the child only five months after their marriage puzzled him but his wife told him that the baby was born prematurely, so he believed her, the husband said. Read More ..

An adulterous Spanish woman who conceived three children with her lover has been ordered to pay £177,000 in 'moral damages' to her husband.

The husband, who along with the other man cannot be named for legal reasons to protect the children's identities, suspected his second wife may have been unfaithful in 2001.

Females 'stray to gather the best possible genes for their offspring'

Infidelity may be natural according to studies that show nine out of 10 mammals and birds that mate for life are unfaithful.

Experts found animals that fool around are only following the urges of biology.

New studies using genetic testing techniques show that even the most apparently devoted of partners often go in search of the sexual company of strangers.

Females stray to gather the best possible genes for their offspring, while males are driven to father as many and as often as possible.

Up to three million Britons may be wrong about who their real father is , experts claim. But using DNA paternity tests to discover the truth can cause its own problems.

When Tessa found out she was pregnant after fertility treatment, she felt a mix of delight and doubt.

This wasn't simply pre-baby nerves - she suspected that her husband might not be the father. For Tessa had started sleeping with a colleague when the stress of the ongoing treatment became too much.

Keen to build a family with her husband, she let him believe the baby was his. But her lover threatened to reveal all if she ended the affair, and Tessa soon fell pregnant again. This time, her lover started to make nuisance calls to her home.

Tessa had no choice but to tell her husband. "I said to him, 'I've had an affair and you may not be the father of my children.' So with that, he went up the stairs, got dressed and left. And that was it," Tessa says in Women Who Live a Lie, a programme for the BBC's Five Live Report.

Would you wear the jacket?

THERE IS A story I used to find hilarious in my high school years about a not too bright man. He was light skinned, his wife was of similar hue, but their first child was born with very dark complexion (darker dan Bello, blacker dan Blakka).

When the man wondered aloud about the baby's complexion his wife assured him that the child was born dark because the child was conceived in darkness (they had sex with the lights off). The man accepted the explanation. Because he loved his wife dearly, he also ignored the fact that the child had other obvious signs of resemblance to the young dark skinned man who did their gardening. To fix the problem, the husband put flood lights, strobe lights, spotlights and forty other lights in the bed room so there would be no more darkness to create dark babies.

"Supporters of paternity identification bills point to a 1999 study by the American Association of Blood Banks that found that in 30 percent of 280,000 blood tests performed to determine paternity, the man tested was not the biological father." Read More ..

Tricked 'fathers' may get bill's help

Michael Lautar was devastated when he learned his first wife was cheating on him, and then crushed to discover the then 5-year-old girl who called him "Daddy" wasn't really his daughter.

Next came the sucker punch.

Lautar is under court order to pay nearly $800 a month in child support and other expenses, despite the fact his ex-wife has admitted in Allegheny County court papers that Lautar is not the girl's father. The child was born during their marriage. After the couple divorced, the mother married the girl's biological father. The mother, the father and the daughter live together in Moon, according to papers filed in Allegheny County Common Pleas Court.